If The Government Won't Fund R..

Why I Call B.S. on Arming Teachers With Deadly Wea... 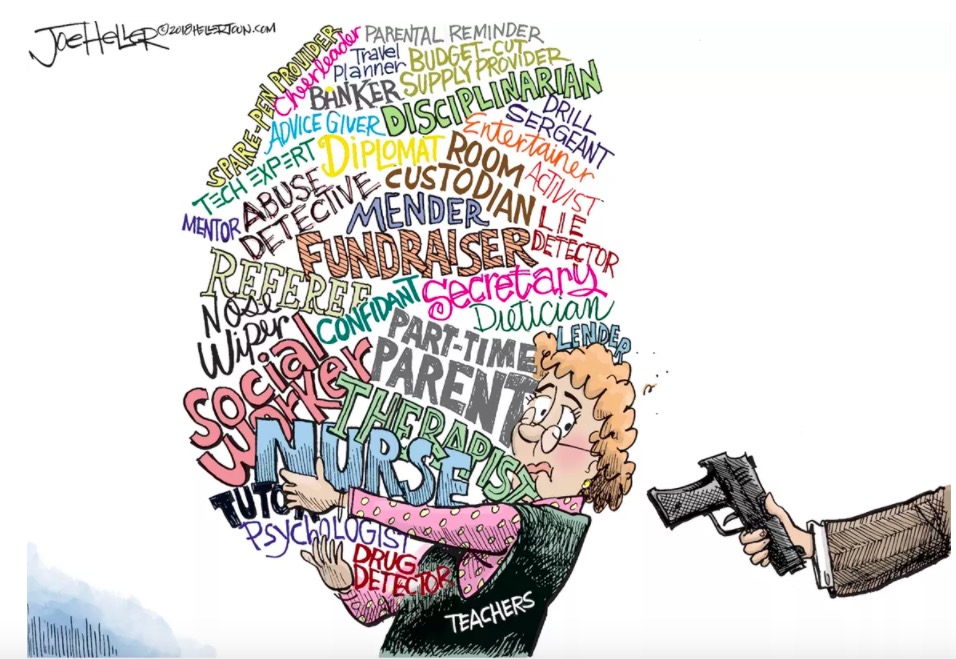 There have been several signs that the current decision makers in Washington D.C. are out of touch with day-to-day American life. Some of the signs include:

There are so many issues I would like to comment on, but I must admit that I am most likely unqualified to talk about the first two, because I am neither a healthcare professional nor an expert on immigration.

I am, however, an elementary school teacher in urban Los Angeles who would like to explain a few reasons why arming teachers with deadly weapons is not only an insult to our profession, but also a B.S. response to reducing gun violence in America.

Please Remember: This piece is a reflection of my opinion, which is based on my experience growing up going to school in Los Angeles, as the daughter of an educator and the experiences of being an educator myself. I cannot speak for educators in rural America; as they have their own school cultures specific to their communities, however, I would like to create a dialogue among educators and lawmakers to highlight major concerns related to gun violence in schools.

I think it’s necessary for those outside the school-world to know what security precautions are already in place at most urban schools:

A Day in the life of a teacher

There are usually no fewer than 5 different roles that a teacher must play on any given day.

The first role is being that of the teacher — creating lessons that are accessible and engaging to a class of 18-36 (more if you’re a high school teacher) little Johnny’s or Sue’s, all of whom are different types of learners, requiring supports in certain areas and challenges in others.

The second role is that of the (unarmed) police officer: correcting unsafe and disruptive behaviors and keeping the peace in a unending number of situations.

The third is that of the nurse: dealing with headaches, stomach-aches, scrapes from the yard and tired bodies from not enough sleep.

The fourth is the role of the therapist: listening to the incredibly different and sometimes traumatic problems in the lives of each and every little student, and the occasional co-worker.

The fifth role is the arguably the best: motivator and cheerleader of each and every student, finding their strengths and celebrating their differences, making them feel cared for and supported at school.

Guns go against everything we teach in school.

The majority of problems caused on a school campus happen when impulsivities surpass rationale. This comes in many forms: students pushing students when something goes wrong or teachers not listening to the needs of their students and escalating a situation instead of taking a step back to reflect. We are constantly reminding students to use their words, not their fists — because we present role models like Nelson Mandela, Martin Luther King Jr., Malala Yousafazai, all of whom preach(ed) non-violence, unification and education as the real tools of change and power. If we bring guns into the classroom, what are we teaching our kids? We can’t solve problems using our words? We can’t make a difference when we band together? When we educate ourselves about problems, we can’t work towards a solution?

Guns aren’t the answer. People are the answer. Kids are the answer. The students in Florida fighting for change are the answer. It’s B.S. that politicians get to polarize an issue that affects families of all different backgrounds, class, race and from different states. Like the Parkland High dad, Andrew Pollack whose daughter was shot 9 times in the school shooting said:

“there should only have to be one school shooting and it should’ve fixed it. Fix it! I’m pissed.”

A sentiment that is undeniably and chillingly held in the hearts of a nation of people, whether they believe in laws on guns or not cannot  claim that the loss of a child, a friend or a teacher is not tragic. We must mourn their lives and we must take action to change our gun culture in America.

It doesn’t mean giving teachers guns or even more insulting, giving bonuses to teachers with guns, give me a break. It doesn’t mean taking guns away, even though politicians love to say that to invoke fear and stir up emotion. It means reducing the number of guns that are available, it means more intense requirements on gun safety and education among gun owners, background checks, and a preventative health care system that offers more mental health services to Americans.

Being a teacher, is a job title that deserves respect. Frankly, insinuating that on top of all the responsibilities that teachers already have, should become trained shooters, too, is a prime example of lack respect for a profession that is already under-appreciated and arguably underpaid. So, President Trump and N.R.A. president, Wayne LaPierre, at CPAC and in other public talks, please show some respect for the profession that shapes kids’ lives. Claiming that guns should be in the classroom is just another example of that out-of-touchness that y’all get criticized for. Also, while we’re on the subject of respect, President Trump, please show some respect for the role of the presidency, because we all hold the role of Commander-in-Chief to the highest respect, but just like a teacher with no classroom management, we begin to lose respect for the role when there’s a lack of professionalism and role modeling.